Over 30 years ago, the first 3D printer was invented by Chuck Hull. Since then, people have used the technology to print objects that have opened new opportunities for every field from science to art. From printing pharmaceutical drugs to printing wearable bikinis, 3D print technology has taken the world by storm and is making for some creative and functional objects.

While the possibilities are endless and the 3D creations of many are incredible, we’ve consolidated a short list of some 3D projects in the works that are truly astounding or at the very least, mind-boggling. Some are completed works and others are in development but in the end, all attest to the awe-inspiring potential of 3D printing technology. Without further ado, here are some amazing 3D print creations:

3D printing technology has been used to create prosthetic limbs, empowering amputees to regain functionality that was lost.

Inspired by a TIME article about a 14 year old boy who lost his hands when a bomb was dropped by the Sudanese government during an attack on rebel forces in 2012, Mike Ebeling of Not Impossible Labs undertook “Project Daniel”. The aim of the project was to create low-cost prosthetic limbs using open-source methods. Project Daniel successfully resulted in a prosthetic arm, printed in about six hours for the cost of around $100 to produce.

The Exo-Prosthetic leg is another 3D printed prosthetic with the aim of creating “a more precise, customizable and affordable prosthesis.” In addition to being functional, the EXO is designed to look unlike traditional mechanical and robotic artificial limbs and rather like a beautiful customizable exo-skeleton.

You can now outfit your home with 3D printed chairs, light fixtures and vases. Designers have embraced the technology to craft some beautiful pieces that are at once functional and also just plain pretty.

Peter Donders is a Belgian designer who has crafted the “Shelly” aluminum chair which is cast in 1 piece in a 3d printed sand mould.

Designers Linlin and Pierre-Yves of LPJacques have created some stunning light fixtures via 3D print technology. Their work includes busts of elephant, deer and bear that are 3D printed and then illuminated from within. 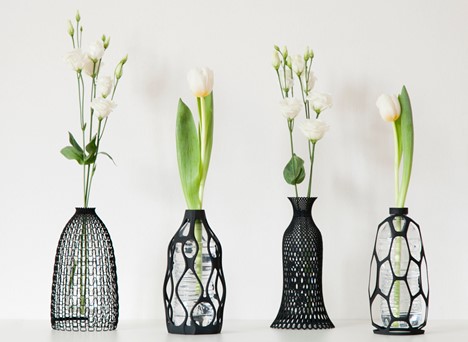 DesignLibero has created a collection of 3D printed vases that function as external shells for the everyday water bottle. The designs completely mask the vessel so to speak and feature geometrical patterns that up the style ante of any room.

3D Printed food is no longer a pipe dream but rather a reality. So much so that NASA has funded research behind using the technology to make food in space. With the need to feed astronauts during long duration space missions, the technology provides a viable solution to hunger in space. NASA awarded the $125,000 grant to the Systems & Materials Research Corporation (SMRC).

SMRC’s 3D printed food system “will provide nutritious food choices in a variety of forms and flavours.” They have 3D printed a cheese pizza! Apparently this is how it went down:

“SMRC has developed a 3D printed food system capable of dispensing viscous food made from powder and liquid ingredients. Cheese pizza has been the first demonstrated meal from SMRC’s 3D food printer. Pizza dough is dispensed onto a hot plate where it is cooked, followed by a tomato layer and cheese topping.”

Made by 3D Systems, the ChefJet and ChefJet Pro are two 3D printers that use sugar and water to crystalize frosting in real time to make gorgeous candies. The ChefJet prints sugar and chocolate coloured delights while the Pro allows for the inkjet to be filled with food colouring, making for a rainbow of colourful and edible results.