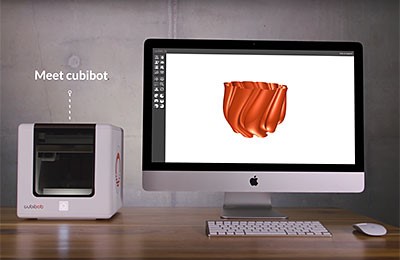 Looking to bring 3D printing to the masses, the makers of Cubibot have developed an affordable, user-friendly, desktop sized 3D printer. With an accessible starting price point of $149 (US), a compact size that fits easily on a countertop, and a database full of pre-built designs that users can select from and hit print, the Cubibot is truly an out of the box, plug and play 3D printer.

Traditionally, 3D printing has either been too expensive, too large, or too difficult for the average person to use. But the makers of Cubibot wanted to remove these barriers and create a consumer 3D printer that would be simple enough for anyone to use, minus the need to be an expert or exceptionally technologically savvy.

The Cubibot makers launched their Kickstarter campaign on Sept. 26, 2017 and to date have raised over $580,000 from over 1,900 backers. Cleary the demand for an entry level 3D printer with plug and play capacity is real.

Cubibot will allow users to print wirelessly. The Wi-Fi and cloud enabled printer will let users connect via their mobile device and hit print. With the funds raised from the Kickstarter campaign, the makers of Cubibot intend to “finish the development and debugging of (their) web based software and mobile applications”, with deliveries of the completed devices estimated to roll out in February 2018.

The Cubibot will be able to print a wide variety of materials including ABS, PLA, wood filaments, nylon and more. It’s smart self-leveling heated bed means users will not have to manually level the device and can instead, just upload their design and hit print.

Its professional features mean it will be a useful tool for professionals, while it’s simple user-friendly design also makes 3D printing accessible to hobbyists, students and 3D printing newbies alike.